Tinnitus is perception of sound only heard by a person. The most common type of tinnitus is NON-PULSATILE SUBJECTIVE TINNITUS (NST), is believed to originate from auditory pathway, mostly from central nervous system. (Ie NON-S|OMATIC)

SOMATIC TINNITUS is defined as tinnitus in which forceful movements/contractions of jaw and neck muscles changes the acoustic attributes of tinnitus, (eg. pitch and loudness.)

(2018) Acupuncture methods put to the test for a tinnitus study: A Bayesian analysis.

Conclusions: Eight interventions are all effective in the treatment of neurological tinnitus, but moxibustion acupuncture seems to be a better trend treatment for tinnitus.’

Conclusions: Acupuncture is effective in reducing the loudness and severity of tinnitus and can be a useful treatment for nonpulsatile chronic tinnitus.

Based on previous studies, the acupuncture

selected, and the patients received 15 acupuncture sessions (3 times a week).’

‘Conclusion. within the somatic tinnitus group, a subpopulation of patients whose tinnitus was modulated in a consistent way by a series of forceful head and jaw muscular contractions was relatively more responsive to Electro Acupuncture treatment.’

‘Methods: A randomized, parallel, open-labeled exploratory trial was conducted. Subjects aged 20–75 years who had suffered from idiopathic tinnitus for > 2 weeks were recruited from May 2013 to April 2014. The subjects were divided into three groups by systemic manual acupuncture group (MA), periauricular electro-acupuncture group (PE), and distal electro-acupuncture group (DE). The groups were selected by random drawing. Nine acupoints (TE 17, TE21, SI19, GB2, GB8, ST36, ST37, TE3 and TE9), two periauricular acupoints (TE17 and TE21), and four distal acupoints (TE3, TE9, ST36, and ST37) were selected. The treatment sessions were performed twice weekly for a total of eight sessions over 4 weeks. Outcomes were the tinnitus handicap inventory (THI) score and the loud and uncomfortable visual analogue scales (VAS). Demographic and clinical characteristics of all participants were compared between the groups upon

treatment except DE in THI. 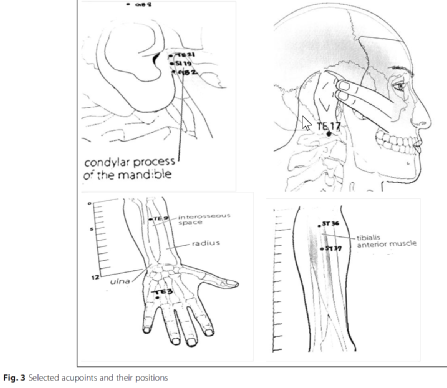 A very unusual case report of tinnitus which did not respond to the usual acupuncture treatment. However the patient identified that the tinnitus could be induced during right foot inversion but not eversion.

'The traditional acupoints on the right foot including Yanglingquan (GB 34), Qiuxu (GB 40) and Sanyinjiao (SP 6) were then stimulated. However, this strategy together with stimulation at the head and neck trigger points was also ineffective in ameliorating the tinnitus. Next, another strategy used three-inch needle inserted into the medial head of gastrocnemius muscle. This method created strong stimulation at the medial gastrocnemius muscle. Right after perceiving this strong stimulation, the tinnitus disappeared in this patient even during ankle inversion.'

(2010) A randomised, placebo-controlled trial of manual and electrical acupuncture for the treatment of tinnitus.

'The aim of this study was to examine the effects of manual/electrical acupuncture treatment on tinnitus in a randomised, single-blinded, placebo-controlled design. Fifty patients (46 males, 4 females) suffering from tinnitus were investigated. The patients were randomly assigned to three groups: a manual acupuncture group (MA), an electrical acupuncture group (EA), and a placebo group (PL). The frequency of tinnitus occurrence, tinnitus intensity, and reduction of life quality were recorded before treatment (Baseline), after 6 treatments (After-Treatment), and 1 month after the completion of treatment (1-Month-After). Standard audiometric tests were conducted on each patient at Baseline and After-Treatment. The patients also provided an overall subjective evaluation of treatment effectiveness at each stage. Eight to ten acupoints were selected at each treatment by an experienced acupuncturist. Six treatments were performed, each separated by an interval of 1 week. Analysis of variance and t-tests were used to statistically compare the data. The frequency of tinnitus occurrence and the tinnitus loudness were significantly decreased After-Treatment compared with Baseline in the EA group (P<0.009). Life quality was improved After-Treatment and at 1-Month-After compared with Baseline in both MA and EA groups (P<0.038). However, no significant differences were detected among the three groups (P>0.079). The audiogram did not show any significant changes after treatment in either group (P>0.091). The overall subjective evaluation indicated significant improvements After-Treatment compared with Baseline in both MA and EA groups (P<0.011). Furthermore, After-Treatment subjective evaluation was significantly better in the EA group compared with either the MA or PL group (P<0.011). These results indicate that there is no statistically significant differential effect of manual or electrical acupuncture on tinnitus treatment efficacy, however, electrical acupuncture does confer some relative advantages.'

'We conclude that there was significant reduction of the counting of the moments pre and post needling in both the groups, and in the group study the reduction is greater that in the group control.'

(2000) Efficacy of acupuncture as a treatment for tinnitus: a systematic review.

'CONCLUSION: Acupuncture has not been demonstrated to be efficacious as a treatment for tinnitus on the evidence of rigorous randomized controlled trials' 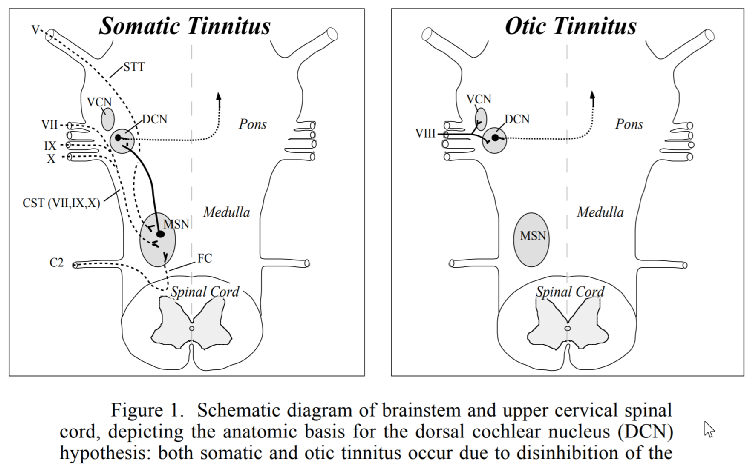 RESULTS: Some patients with tinnitus, but no other hearing complaints, share several clinical features including (1) an associated somatic disorder of the head or upper neck, (2) localization of the tinnitus to the ear ipsilateral to the somatic disorder, (3) no vestibular complaints, and (4) no abnormalities on neurological examination. Pure tone and speech audiometry of the 2 ears is always symmetric and usually within normal limits. Based on these clinical features, it is proposed that somatic (craniocervical) tinnitus, like otic tinnitus, is caused by disinhibition of the ipsilateral dorsal cochlear nucleus. Nerve fibers whose cell bodies lie in the ipsilateral medullary somatosensory nuclei mediate this effect. These neurons receive inputs from nearby spinal trigeminal tract, fasciculus cuneatus, and facial, vagal, and glossopharyngeal nerve fibers innervating the middle and external ear.

'This study aims to determine the effect of intensive acupuncture on severe tinnitus. The structure of the study was a randomized, double-blind, clinical investigation with open therapeutic surveillance and included 54 patients. All were subjected to 25 treatment sessions over a period of two months, each treatment lasting 30 minutes. Fifty-two patients completed the study. The variables used for self-registration were based on the visual analogue scale (VAS), where annoyance, loudness and awareness of the tinnitus were assessed. These were recorded twice daily over a four-month period starting one month before the first treatment and ending one month after the last treatment. Questionnaires, interviews and audiometry were carried out repeatedly. No statistically significant differences were found between the acupuncture group and the placebo group.'